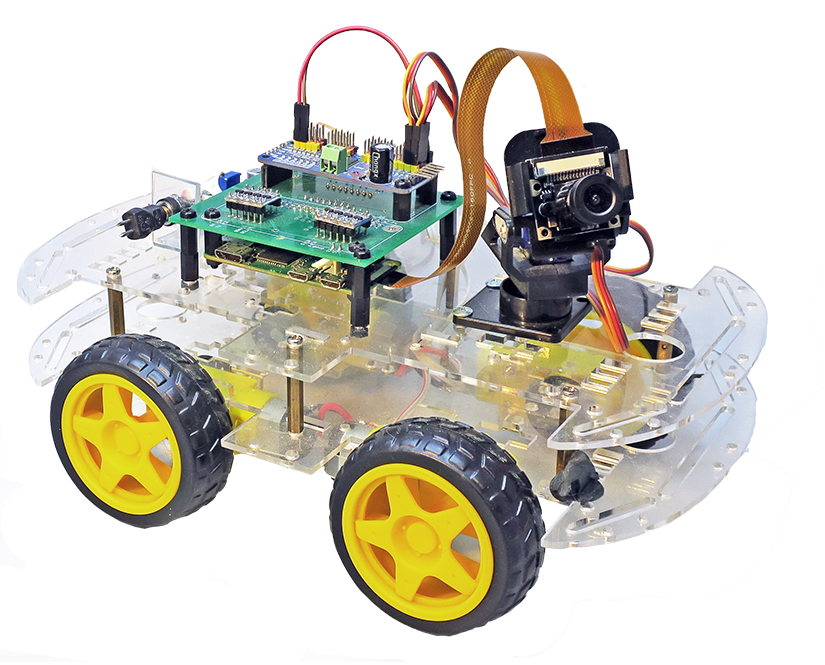 In this article I will demonstrate how to make a robot car controlled using web browser. It will also stream a video feed using a camera connected to the car. You don’t have to be an expert to make this robot. All the required code is already available on RemoteMe.

At the bottom of the post, the principle of the car’s operation is described in more detail.

In a previous tutorial I showed how to control the position of the webcam and capture the image on the browser link and here control the camera. Now we will expand this project and build a car with 4-wheel drive (controlled like a tank – differential steering ). Check out the video tutorial for more details of all the steps.

Raspberry Pi controls the servos via the PWM module and the driver by setting the pins on the H-bridge and providing PWM signal from the same module that sends the signal to the servos. (Thanks to the module for generating the PWM signal, we do not have to generate these signals by Raspberry Pi itself –  just by I2C we send the appropriate instructions to the servo driver (through the python library provided by adafruit), and this generates the appropriate PWM signal for the servo mechanisms and bridge H) 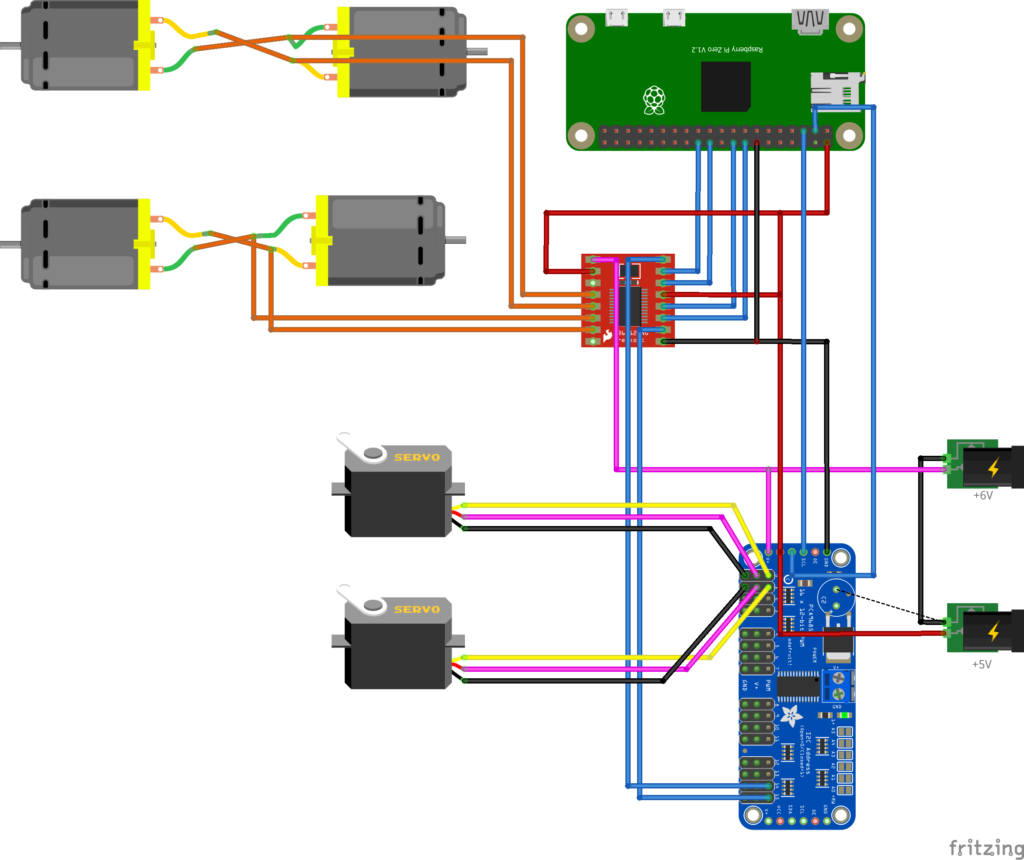 Via the I2C bus RPi  controls the servo controller, the two last  controller’s outputs are connected to the H-bridge, and the PWM signal is used to set the speed of the motors. The RPi-pins are also connected to the H-bridge. The states on the appropriate pins will determine the direction of rotation of the motors. – I refer to the TB6612FNG documentation for details. You might as well use the L298N bridge or similar.

I have designed a PCB, which you can use eagle, gerber etc. here pcb.zip. The circuit diagram coincides with the diagram above 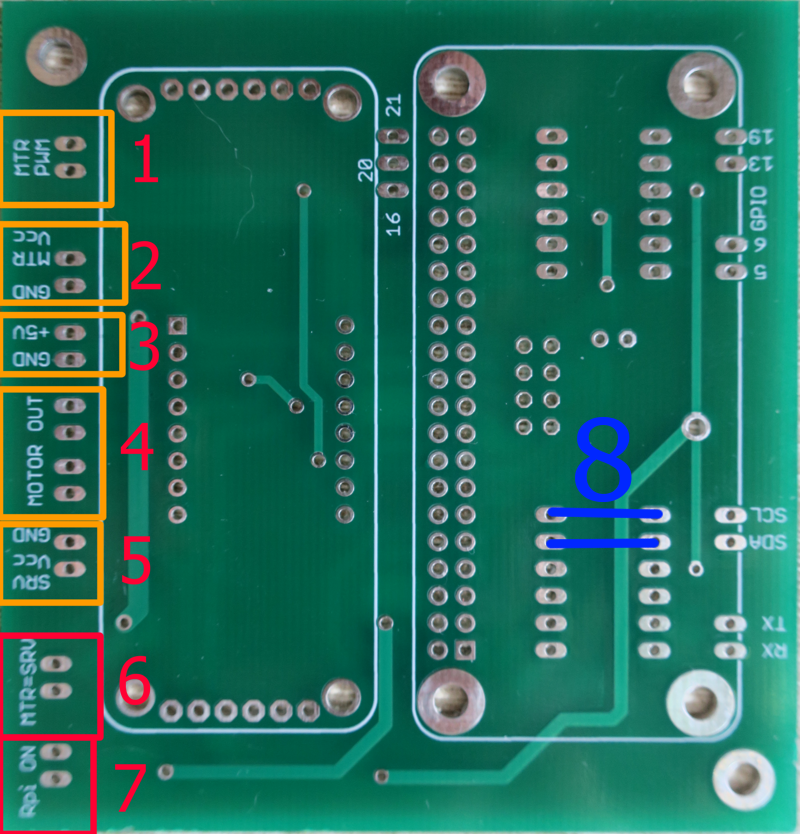 Of course, you still need the right power supply, I connect the 6v  to the drive and servo motors, and 5v for Raspberry Pi and controllers.

below are some illustrative photos of the whole car: 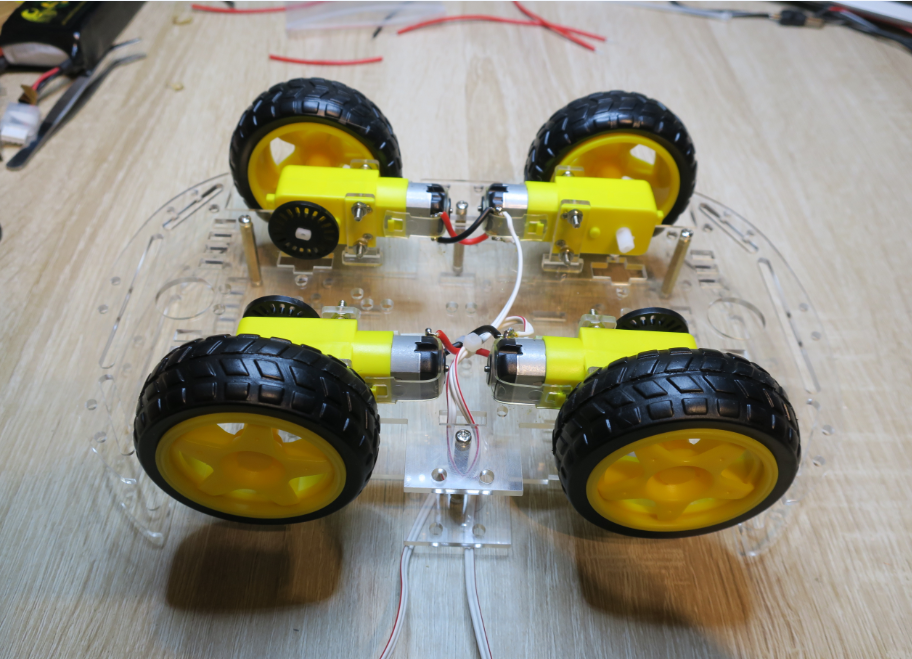 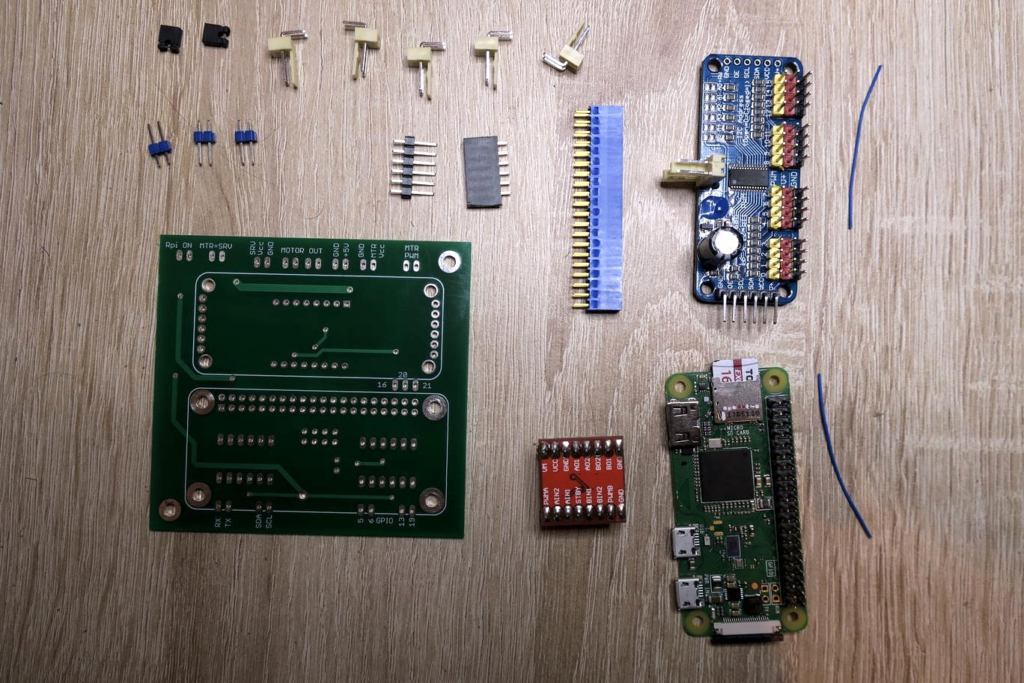 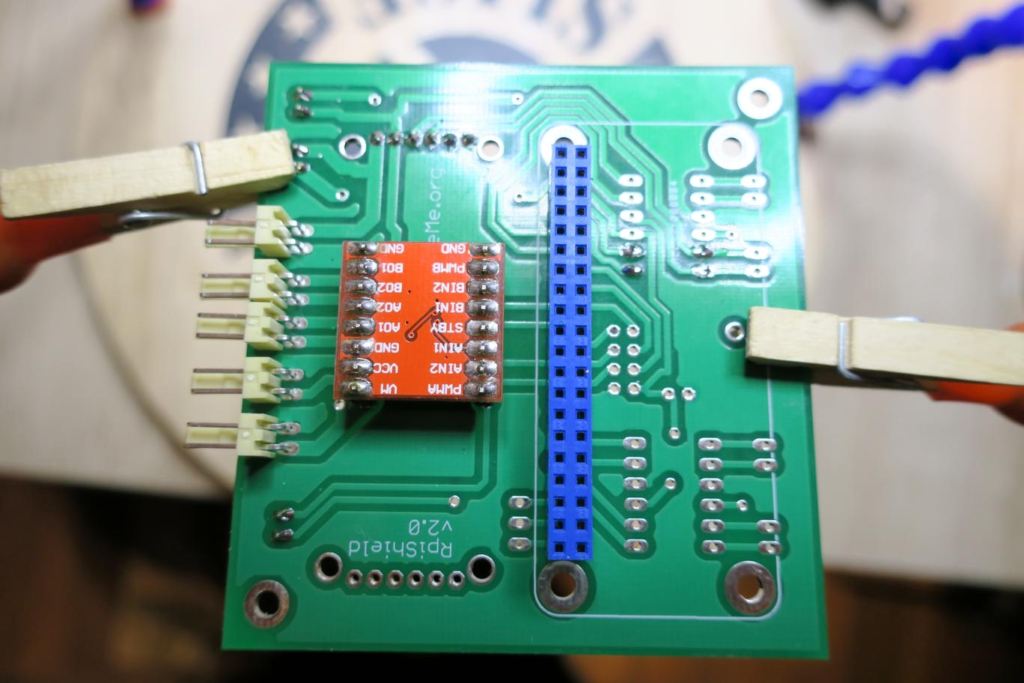 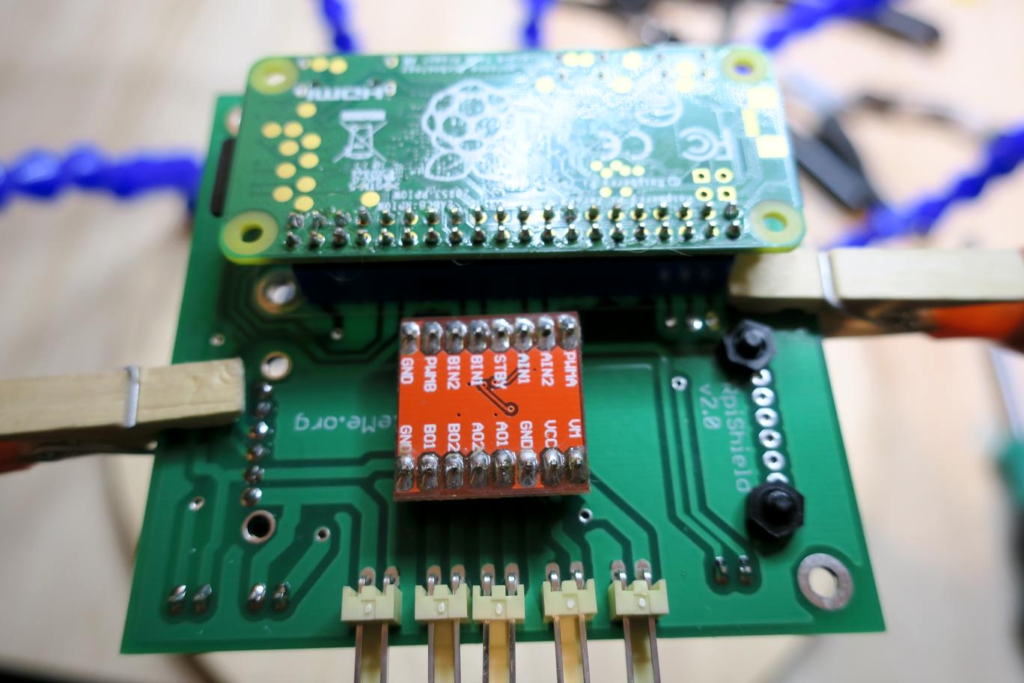 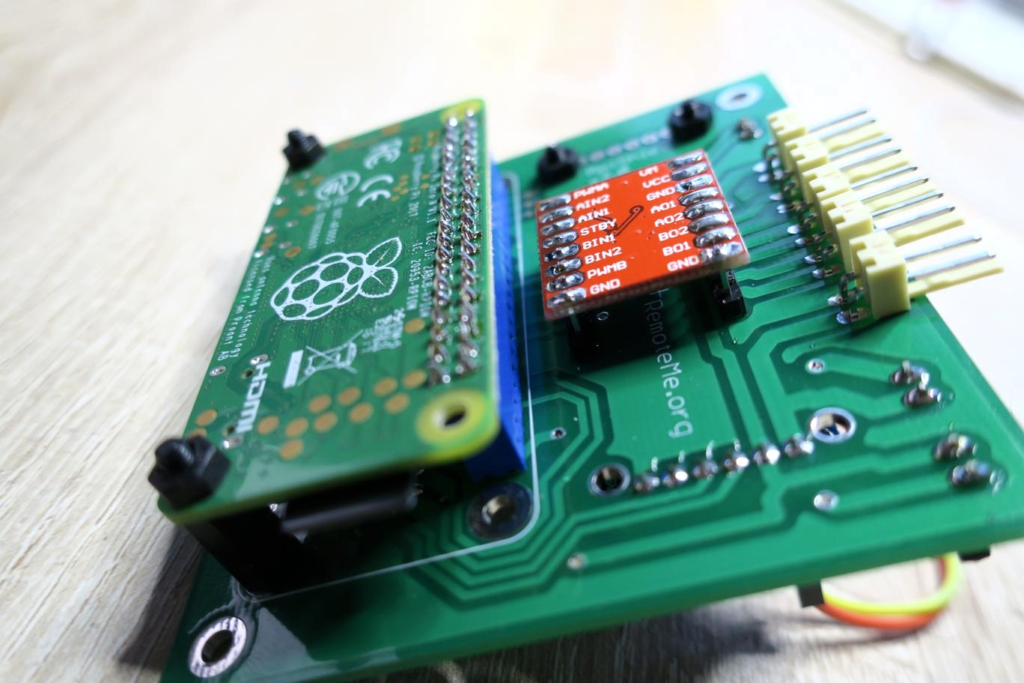 I used plastic spacers to connect the tiles to the car.

Before creating the project, enable the camera and I2C communications using the raspi-config described here

This project is one of the ready projects that you can easily implement with a few clicks:

Go to the “Build It” tab and follow the steps, at the end click on “Build Project” and you will receive:

After clicking “Get QR” you will see a QR code that you can scan with your smartphone, or simply open the page with the “Open” button in the browser on your computer.

The car should drive like in the video above – it can happen that it turns in the wrong direction or the servos are badly calibrated, below in the discussion of the code I wrote how to fix it.

As you noticed, creating the project was highly automated. Therefore, I will now discuss what exactly happened and how to modify your project.

First of all, two variables were created (variables tab)

Variable cameraPos transmits camera positions and joystick positions. Both are the type “Small int x2” which means that the value of a variable is two integer numbers.

The Python script was automatically uploaded. Of course, we can preview and modify it (to create a new Python script eg for other projects see here). With the information you need now, the Python script is another device in remoteMe is managed by a script (run by ./runme.sh), we can send messages to this device, the device also reacts to changes in variables that it observes and can change these variables .

To open the python script, click python.py and select Edit:

It looks as follows. below I will discuss interesting fragments

the setMotor function for motorId 1 or 2 sets the speed (can be negative). Just on the appropriate pins we  set the states accordingly (forward and backward movement), and then depending on the speed, set the PWM filling accordingly using the servo controller.

so far, we will not discuss it, because earlier we have to change the range of servo traffic.

this function will be called as the variable drive changes – eg after changing the joystick on the page. x, y is just a joystick’s coordinates  Based on these variables, we calculate the speed of the left and right side of the car.

give the cons in different combinations (in  X and/or Y place ) until the car moves forward – when the joystick is tilted up.

Then, if the right and left sides are swapped, in the above function, swap left and right places.

We simply set the appropriate pins (these to control the H bridge) on the outputs. And we create an object to control the servos control. (Note that the server driver should work properly, we must enable I2C communications using raspi-config more here)

RemoteMe configuration and setting which functions are to be called when the variables for camera and drive control are changed.

That is all in the Python script , as you can see, it is not too complicated, for more information go here

In fact, two web pages have been created – one for calibration, the other – a page for controlling the car and displaying the image from the webcam. Open the calibration page:

A web page opens with two sliders. Set the top and bottom to the middle position – the camera will move – the upper slider should move the camera in the x-axis, the lower y-axis. If it is not the case, swap the servo signal wires.

Then, using the sliders, set the maximum deflection of the x-axis and the y-axis, in my case:

Let’s write numbers somewhere in the notepad and open the page to control the car for editing; 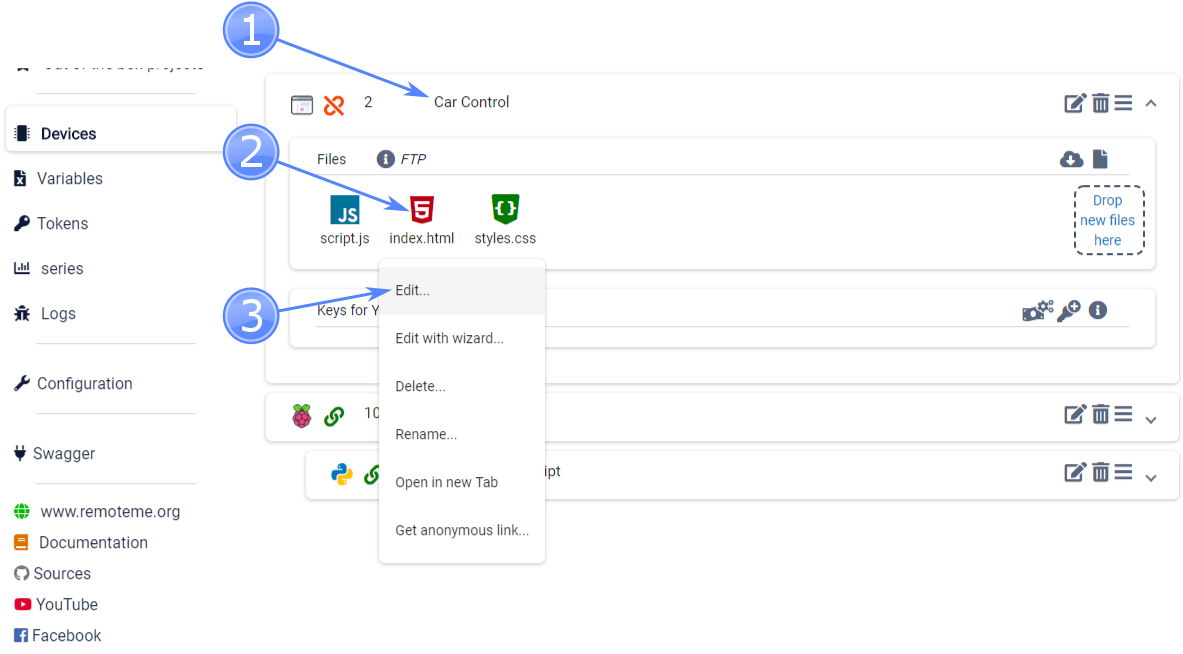 
These are automatic components for controlling the car and displaying video.

The page you have opened already contains the components you need to control your car. The only thing you need to do is change the range of motion for servo mechanisms so replace the values of xMin, xMax, yMin, yMax, values you received on the previous page with the sliders.

If you want to create your own website with your components, it is best to create it from the beginning shown here – it will allow you to add components in an easy wizard where you can set the necessary parameters. Or just edit the source of this page – it’s worth creating a copy before if something went wrong :).

After changing the value of x / yMin / Max, we can open our website eg on a smartphone, click on index.html, but this time we choose the options to get anonymous link Next, click the QR code icon, and the code that appears  scan by a smartphone.

Of course, the control works also via the Internet – not only in the local network, but in some cases an additional configuration is needed more about it here

Some technical details (not mandatory)

RemoteMe serves a website to control your car (and additionally it logs into your account – hence the token in the link opened by the smartphone) and participates in negotiating the creation of a WebRTC connection. The webRTC connection is a direct connection (RaspberryPi – browser (in some cases, for example, a turn server is needed for NAT)). After creating the webRTC connection, the variable state is not sent to RemoteMe at all (because the field “onlyDirect” in the components is set to true)

The program on Raspberry Pi which you run with the ./runme.sh command creates a websocket connection with the RemoteMe platform and manages the Python script (sends messages to it from the script to the platform etc). The operation of the Python script is possible thanks to the additional RemoteMe libraries (located in the leafDevices/base/ directory).

The websocket website itself connects to the RemoteMe platform (this is allowed by the javascript scripts imported in the header of the index.html file in paths start with /libs/). They facilitate and establish communication with the RemoteMe platform. Same components inserted in the index.html of the type: <variable component="**" In the remoteMeComponents.js file functions are replaced with “standard” and “bootstrap” html components in addition to the components are pinned events responding to user actions and sending relevant messages to Python script. You can see how remoteMeComponents.js creates new components – it can be interesting when you have to create your own components that RemoteMe does not allow to add from the wizard. In most cases, the actions of your components will perform variable changes as

which will send information about the variable change to the Python script, we also control the engines by setting the appropriate variable.

By creating this project I wanted to show you how to easily control your car with FPV view. The project can be expanded, or changed eg when using a different H bridge than I. So I encourage you to experiment with the sources of the project :). When this is your first project, I encourage you to do a project with a flashing diode at the beginning and read the documentation at www.remoteme.org